You are here: Home > Transport > Blogs > How IR sensor 2.0 will improve IoT technology The next generation IR sensor 2.0 will be more flexible, much thinner and cheaper to manufacture than old sensors. This opens up for a big improvement and more areas of use within IoT.

The development of IoT and connected services has undergone an extremely rapid development. Going back only 10 to 15 years, few could even imagine how many services that would be connected by different products and solutions, through this somewhat obscure three letter combination of IoT, says Robert Ekström, CEO of JonDeTech.

Today, IoT is an established expression being labelled on all different gadgets and industrial products, surrounding our daily life. The world of IoT is here to stay. In the future, it can be said that anything that can be connected will be connected. Is there a customer benefit tied to it, it will most likely happen. And sensors play a vital role in this process. Sensors convert physical input into digital signals, which can then be stored for access and analysis – especially if the sensors are cheap and small.

Small, cheap and flexible sensors can be a driver of IoT

Fact is that management consulting behemoth McKinsey lists particularly cheap and small efficient sensors as one of the most important factors for the growth of Internet of Things. But why do McKinsey point out the small sensor as a key driver for the IoT development? Is this really new? Someone might even say that sensors have been used before, in for instance cell phones?

And that is correct, integrating a temperature sensor into a mobile phone is not a new invention. It is an IoT solution that has been done in the past. But integrating, for instance, a traditional temperature sensor in a cell phone had its challenges since the traditional sensor could only be used to measure the temperature by contact, with the result that the temperature measurement by contact provided an incorrect measurement when it was being removed from the pocket since it takes some time for the phone to adapt to ambient temperature. With the IR sensor 2.0, on the other hand,  built on nanotechnology, you can develop and integrate a small sensor using contactless temperature measurement in smart phones. How is that possible?

One of the key components for improving IoT solutions is the thermophile sensor. The thermopile can most easily be described as a series of connected thermo couples that can convert thermal energy into electrical energy. However, the size and manufacturing cost of the first generations thermopiles have limited the application areas.

But with the assistance of the new generation of IR sensors, it can now also be used for the contactless measurement of as well temperature, relative temperature and heat flow, as well as presence detection. This new sort of thermopile can be of use for several commercial IoT applications such as flame and fire detection, motion, absolute temperature measurements, heat measurement and control of heat sensitive parts and plumbing.

But that is not all. These new and advanced thermopile sensors can also measure heat flows and have a time constant describing how fast it reacts to the value change. These sensors are made with nanotechnology in a plastic matrix, and are constructed in three different layers, where the most important layer is thermopile layer. 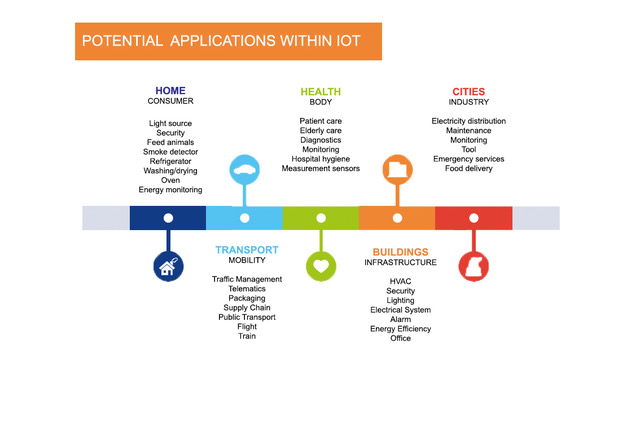 The IR sensor 2.0 also has a vertical structure, which enables flexible and robust plastic instead of the fragile ceramics or silicon that is used in the old IR sensors on the market where the thermocouples are configured horizontally. This in turn limits the design of the sensor and makes a conventional sensor much more difficult to mass-produce, due to the fact that a protective metal container is required.

The perfect sensor for the expanding IoT world

All this together brings us a very cheap, robust and flexible sensor very well suited for the IoT world. Calculations shows that the production cost of a sensor could be up to 1/10 per unit in large volumes, compared to a conventional sensor. And the areas of use can only be considered as vast.

One area is the health sector. Here the IR sensor 2.0 can be integrated into a patch (similar to a common wound patch) at a low cost that reflects core body temperature. A Wi-Fi or Bluetooth enabled temperature patch with this new type of sensor can be paired with a smartphone for real-time monitoring of for example a sick child.

Another interesting area, driven by IoT, is facility management. The new IR sensor 2.0 is also ideal for property owners who want to take advantage of the IoT technology by using smart windows. The information collected by the sensor can be used by so called smart windows in houses to change the window light and heat transfer to maintain a constant temperature in the room throughout the day without temperature spikes.

But the new sensors can also be used installed on standard windows to lower the building energy consumption by providing the air conditioner Information to proactively adjust for changes in heat radiation from the windows.

Another application is smart offices or public spaces such as libraries where you want to decide if a place is available or not. By using the sensor to wake the device only when someone is present, energy consumption can be decreases and battery life extended. The IR sensor 2.0 can potentially also be used to activate biometrics authentication system, such as fingerprint scanning or facial and iris recognition, which consumes a lot energy when active.

The IoT area is growing rapidly. With the use of IR sensor 2.0 there are many big improvements and opportunities within reach. The new connected world with flooding data requires an IR sensor 2.0.

The author of this blog is Robert Ekström, CEO of JonDeTech

Robert Ekström is CEO of Swedish IR sensor producer JonDeTech. He has held leading positions in the global IT industry for the last 20 years, including as head of EMC in Sweden and companies such as Servicenow, Fujitsu, Dell and Xerox. In spring 2018 he led Swedish IR sensor manufacturer JonDeTech’s introduction to Nasdaq First North Stockholm.